The short answer is, no.

The “Tyranny” of Passive House

In his Discourses, Plato has Hippias The Sage assert that

“…law is the tyrant of mankind, and often compels us to do many things which are against nature.”

The Passive House system is truly rigorous.  Often it requires modifying a decision or restraining an impulse that would be natural in another context.  Specifying an open masonry fireplace in your design program would be a triple nightmare for the Passive House Consultant to deal with.

Never fear.  The passive house occupant need not forfeit the vision of a cozy winter’s evening by the fire.  There are a few wood stoves and prefabricated fireplaces on the market that are virtually airtight.  They can maintain a fire at a low enough output to provide the cozy atmosphere that we naturally seek, without the disadvantages noted above.

The point is, that Passive House limits some decisions, but it does not dictate them.

There are a number of architectural characteristics of a Passive House that facilitate performance.  To keep warm here in our Mid Atlantic winters, Passive Houses like to spread out in the sun, and look to the south.  At the same time, they like generous overhangs and shutters to avoid overheating in summer.  Provision for cross flow ventilation, such as windows on two exposures in each important room, and operable skylights, can reduce the need for mechanical air conditioning during the shoulder seasons.  In other words, it could easily look like a traditional bungalow or cottage.

Passive House also likes simple massing—corners, offsets, and projections present challenges to achieving airtightness, and inevitably introduce thermal bridges.  In this sense, it could also be a cape cod or colonial style house.

Some features fight against the grain.  Our clients, the Grants of Derwood Maryland, wanted mulled windows—but the muntin bars reduce the amount of light passing through by as much as 5%.  Passive House cares deeply about this—when this amenity was factored into the Passive House Performance Package (PHPP), the performance fell off perceptibly.

But there was always a solution somewhere, by enlarging south facing windows, or adding additional insulation to compensate for the loss of solar gain.

Are you wondering what this house is going to look like when it’s done?  Here’s a rendering of the Grant House.  Not too weird looking, is it? 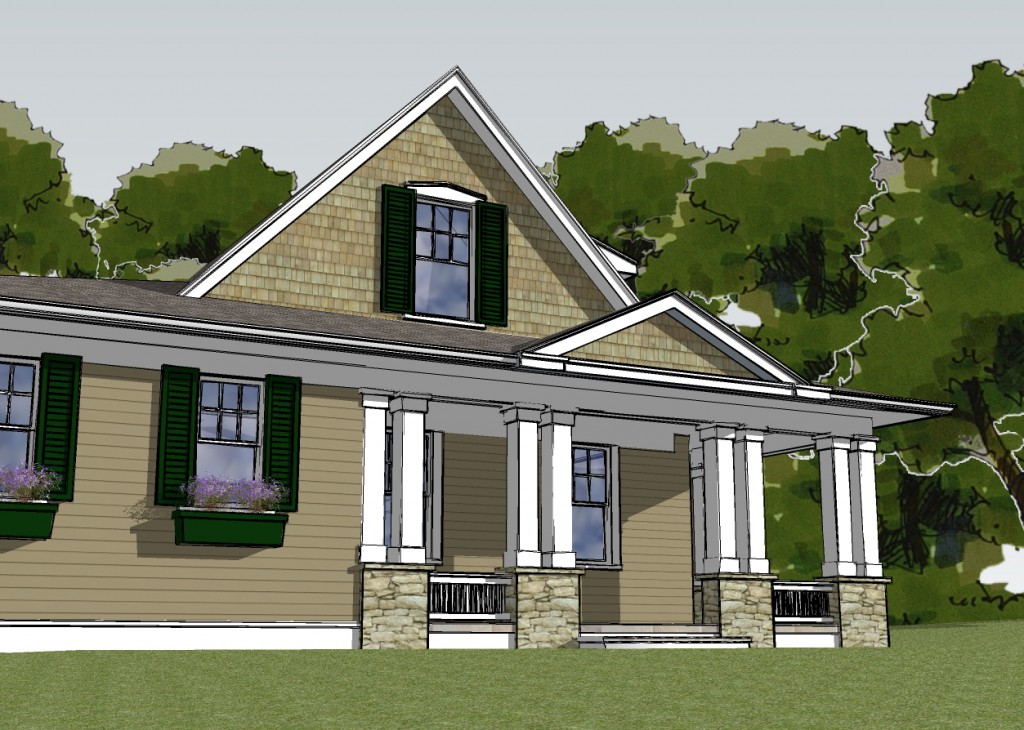 The Passive House cuts a strictly simple silhouette on the landscape.