A Classic Bungalow Made As Green As Green Can Be But…. 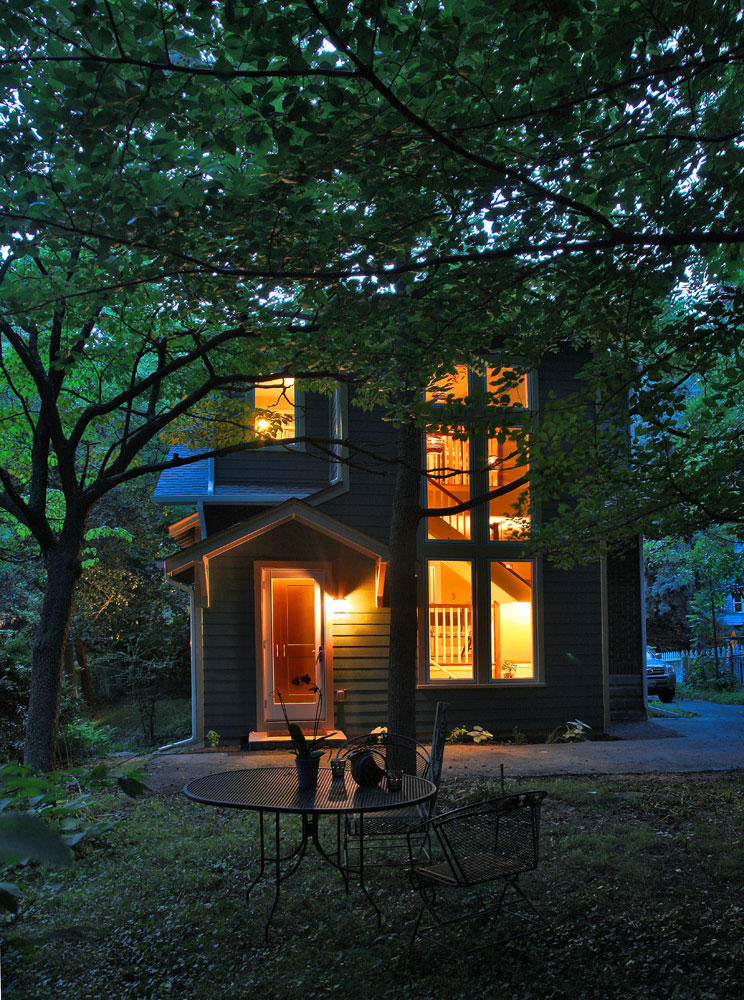 A LITTLE OVER A YEAR AGO we completed a major renovation and addition project for a vintage bungalow in the Takoma Park, Maryland Historic District.  We made some minor changes to the interior walls, popped up the back half of the roof—and most significantly—removed two separate, steep, narrow, head-banger stairways, and added a mud room and stair tower at the rear of the house.  Removing the existing stairs dramatically improved flow, and the stair tower, with its two story group of windows, flooded the back part of the house with daylight and connected it with the garden.  From a design standpoint, the project was a success, winning an American Residential Design Award for its class.

Our green remodeling project included a deep energy retrofit and all new mechanical systems.  So it was high time to compare our energy performance modeling with a year’s worth of utility data, to see how our work actually faired.

As a green builder I feel the need to validate the strategy I’ve been working to perfect over the past decade.  I call it the Net Zero addition, meaning that when we add to the area of the house, we strive to design it so that the new, expanded home won’t use any more energy than it did before the work was done.

Green builders and remodelers spend a lot of time number crunching and teasing out the most excruciating design details to achieve their idea of a high performance home.  Ultimately, their grand, visionary efforts are proven by the most banal of measures:  the utility bills.   SO I PICKED UP A STACK of the owners’ utility bills going back to 2007, and entered the usage data into a spreadsheet.

At first glance, the results were gratifying.  Gas usage—the most direct indicator of heating system performance—was stunning.  Our modeling predicted a reduction of heating energy by 60%.  Actual gas use for 2012 was right on the money, at 38.4% of what had been used in years prior to construction—even after adding more than 14% more heated floor area.  But that should have been no surprise, since we insulated the original walls and roof, and superinsulated the new spaces.  New windows were triple glazed, and the new multizone HVAC systems were top of the line.  We air sealed the house so effectively, that we had to use an energy recovery ventilator (ERV) to provide fresh air.

However, when I got to the electric bills, I was astonished to find that electrical usage had increased—by 84%!

A Green Builder’s Vision vs The Human Factor 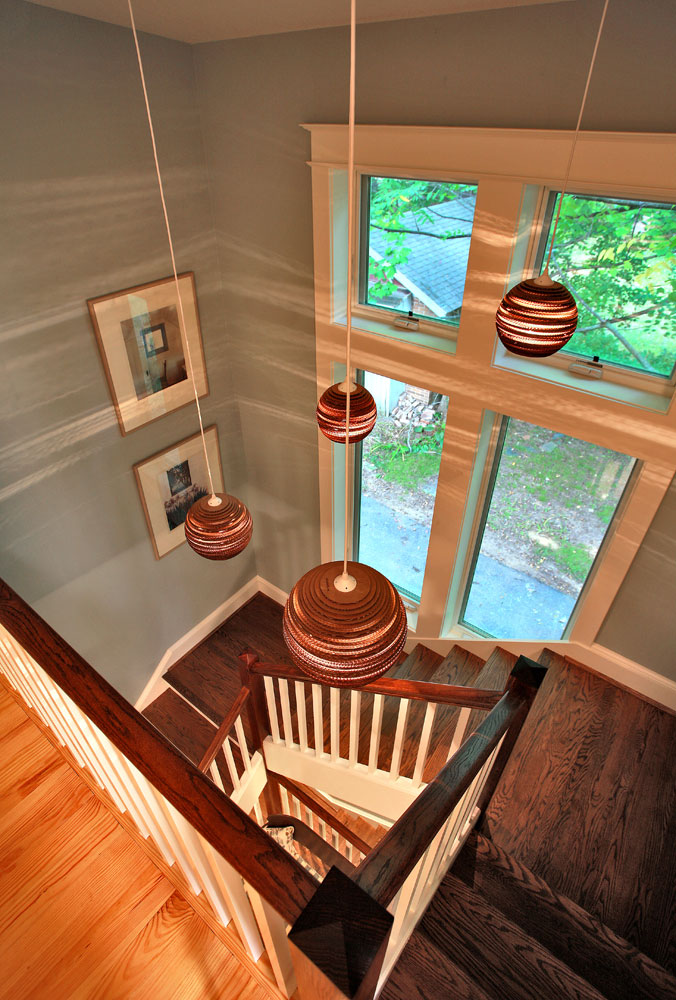 Some of this increase in electrical usage was expected.  Before the renovation, the owners cooled their bedroom at night with a window AC, and pretty much sweated it out in the rest of the house.  Now, all three levels of the house are cooled by a sophisticated multi-zone central AC system.

But looking at monthly data, electrical use was actually lower in the summer months than it was in the dead of winter.  Central AC may have been a factor, but there is much else in play here.

One factor is lighting, which not only included new fixtures for the spaces we added, but also included specialty lighting—for kitchen work surfaces, accenting built-ins, and exterior security lighting.  Just the fact that all the spaces in the house were inviting, and provided special purposes—such as a TV room, an exercise room (with another TV), an office, a dressing room—tends to increase the lighting load.

Use of the kitchen increased as well—one of the owners said that before the renovation, she would not cook at all in the summer, stating with only a little exaggeration, “I…actually was shocked at the grocery store when people were buying food–I could not imagine how they could cook!”

Oh, yes, and when the new refrigerator moved in, the old one moved downstairs, to stock beer and overflow food.

The new mechanical equipment does add to the load.  The superefficient water heater has a power vent feature, and an energy recovery ventilator (ERV) is necessary to provide fresh air, because our air sealing was so effective.

Nevertheless, it appears that occupant behavior is a substantial part of the increase.

The Green Builder Concludes and Concedes

ON THE FACE OF IT, we did not do so bad.  For one thing, we held the actual increase of the footprint of the house down to the nubbin.  The mud room and stair tower added only 138 square feet.  (This is in contrast to the familiar approach, which is to ignore the problems of space and function in the existing house, and build the “big honking” addition: family room on the main floor, master suite above—resulting in another 800-1000 square feet of heated space, and more or less abandoning the original part of the house.)

Total energy use (expressed in kBtu’s) was reduced by 21%.  On a square foot basis, it looks even better—a reduction of 33%.  What is not accounted for here is the inefficiency of the electrical grid—which loses roughly 2/3 of the energy generated at the power plant.  If that is factored in, then we have failed in our Net Zero effort.

excerpt from the spreadsheet:

The failure is largely due to the human factor.  Our homes are awash with electronica—ipads, kindles, tivos, much more powerful cellphones—all of which rely on chargers and powerpacks.  I’m a good green builder.  I specified Energy Star appliances for the project, but that certification does not guarantee low usage—only that a particular appliance performs well compared to others in its class.  It disguises the fact that a 25 cubic foot side by side refrigerator gets its Star—but uses 50% more electricity than the same sized top freezer unit.  But that Star makes us feel good, and earns LEED points as well.

AS GREEN BUILDERS AND REMODELERS, we are getting much better at insulation, air sealing, and efficient windows, doors, and mechanical systems, but we have a ways to go with the informational side: understanding and anticipating occupant behavior, and incorporating this knowledge into our modeling capabilities.